How We Saved a Macaw

As you’re lying on the beach at Sandos Caracol Eco Experience Resort, sipping on a mojito and soaking up the sun, you might be approached by somebody offering to take your picture with beautiful animal. This person might have a monkey, an iguana or a brightly colored macaw on their shoulder, and it seems like the perfect photo opportunity. However, many travelers don’t know the reality behind these animals. So today we’ll tell you a story that might make you stop and think.

Lupita is a blue-and-yellow macaw (Ara ararauna) who used to be one of these beach photo animals, and today she lives with us at Sandos Caracol.  When you see her, you’ll notice that many of her feathers are gone, leaving behind bare patches of skin. Here’s the story behind Lupita the macaw and her missing feathers… 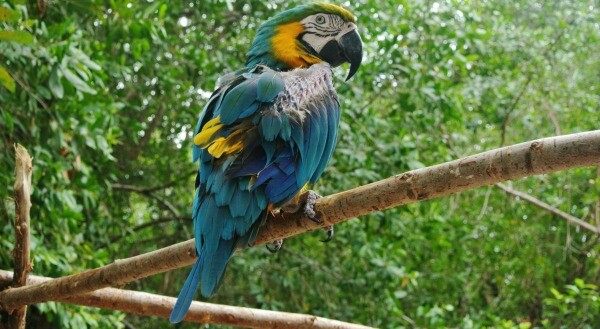 Lupita used to be covered in vibrant feathers, and she worked with photo salespeople along the beaches of the Riviera Maya. Her handlers would take her out to the coast day after day for long hours, teaching her to pose with kids and tourists that paid for photos. As time went on, Lupita learned more and more tricks, spreading her wings, laying in people’s arms, and even saying “Hola!” She was rewarded with treats, but when she displayed natural behaviors like making noises or pecking at people, she was smacked on the head.

After many months of seeing other birds flying above her during her days posing for pictures on the beach, one day Lupita decided she wanted to fly. She climbed to the top of a tree and took off, but only managed to soar two meters. Lupita fell to the ground, and injured her leg. She could no longer do all the poses she had been taught, and she had a hard time standing upright. Her owners could no longer use her for photos, so they kept her in a cage.

During her time trapped in a cage, Lupita became lonely and frustrated. To show her distress, Lupita began to pick away at her beautiful, bright blue and yellow feathers one by one.

One day, her cage was finally opened and she was taken to a new place. At this new place, Lupita received special care with a balanced diet and vitamins. She continued biting her feathers for a while, but after a few months the habit began to slowly go away.

Today, Lupita loves her new home at Sandos Caracol Eco Experience Resort! She lives in the plant nursery area with her two macaw friends, Darwin and Ek, and spends her day relaxing and  snacking on fruit. Lupita’s feathers are even beginning to grow back thanks to the Sandos Eco Club and their loving care.

Next time a beach vendor asks if you want to take a picture with their animal, remember the story of Lupita the macaw, and make sure to spread the word about this problem that has harmed many animals.

Say No to Animal Photos!

Mayan Celebration of Life and Hope

Day of the Dead Papel Picado

Papagayo Beach is One of the Best Beaches in Spain