A pampered piglet, full of care and affection, comes to Sandos Caracol… but why? Keep reading and find out how Niasha arrived at our eco resort.

Niasha is a two-and-a-half year old Vietnamese pig who lived with her loving family, made up of her, her human and a dog, in Playa del Carmen up until about a month ago.

The story of Niasha is different from other stories of the animals that live on the Mini Farm at Sandos Caracol; unlike the others, she was not mistreated and was never destined for human consumption.

It’s precisely because she was such a beloved pet that her human decided to change Niasha’s life; she was afraid of losing control of Niasha in case of an emergency, because our pig already weighs 65 pounds and keeps growing. Plus, she needs special care that’s not easily found in this area.

Vietnamese pigs are among the most abandoned pets precisely because of the difference between their tiny appearance at birth, and the big difference in size when they reach adulthood. It’s complicated to give them a good quality of life in a standard-sized house without any adaptations.

A pig such as Niasha needs several special cares, such as long daily walks and a pool to bathe and cool off. Pigs are very sensitive to heat since they cannot sweat, which is why they look for mud or fresh water to wallow in and lower their body temperature.

At Sandos Caracol, we want the best for Niasha, so we’re giving her the best quality of life that an eco resort can give…  long walks every day (even though we still have to bribe her with with apples) and all the care and medical attention she requires. 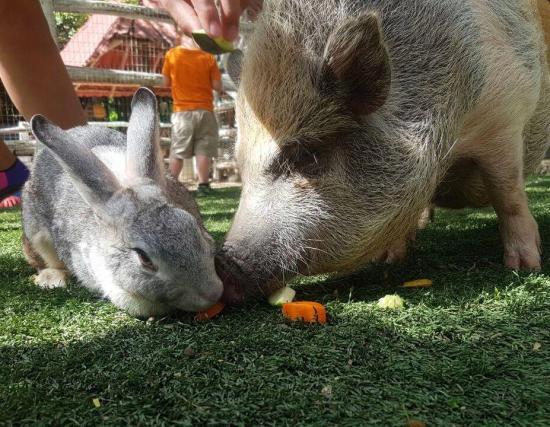 Little by little, Niasha’s social life is becoming healthier. She’s friends with the sheep and rabbits, and as she adapts, she will be taken out for a walk with Luna, Pech and Bo’ox, our xoloitzcuintles (Mexican hairless dogs).

Did you know that pigs have the intelligence of a 3-year-old child?

During her life at this eco resort in Playa del Carmen, Niasha will provide the opportunity for children and adults alike to have contact with animals, which makes her perfect for families who come from large cities and don’t get much first-hand animal experience.

Niasha’s presence holds great meaning, opening the minds and hearts of everyone who visits us. We hope that everyone who meets her will see that animals have feelings and their own personality, too.

Most of us grew up without having any contact with pigs beyond our plate, and that’s exactly what we strive to address at Sandos Caracol through rescuing and caring for animals like our pigs. Even though we’re increasingly aware of their role in the animal kingdom, we still have a lot to understand about these fascinating animals.

Plus, they’re just as friendly and playful as dogs! All you need is a good space and a lot of love because they love being scratched!

If you want to know Niasha, book your stay at Sandos Caracol!

6 Delicious Combinations at Cupcake Cafe That You Can’t Miss

5 Signs You Need a Vacation