Now in its fourth edition, the Tulum Vegan Fest has returned here to the jungles of the Riviera Maya featuring sponsors such as the award winning restaurant Charly´s Vegan Tacos. Originally based in the city of Tulum, less than an hour south of Playa del Carmen, the Tulum Vegan Fest is an event where everyone, omnivores and vegans alike, can participate in three days of conferences, vegan cuisine, music, yoga, kids’ activities and more, all focused on animals, the environment, and personal health. This time, the Tulum Vegan Fest will take place January 27 – 29, 2017. 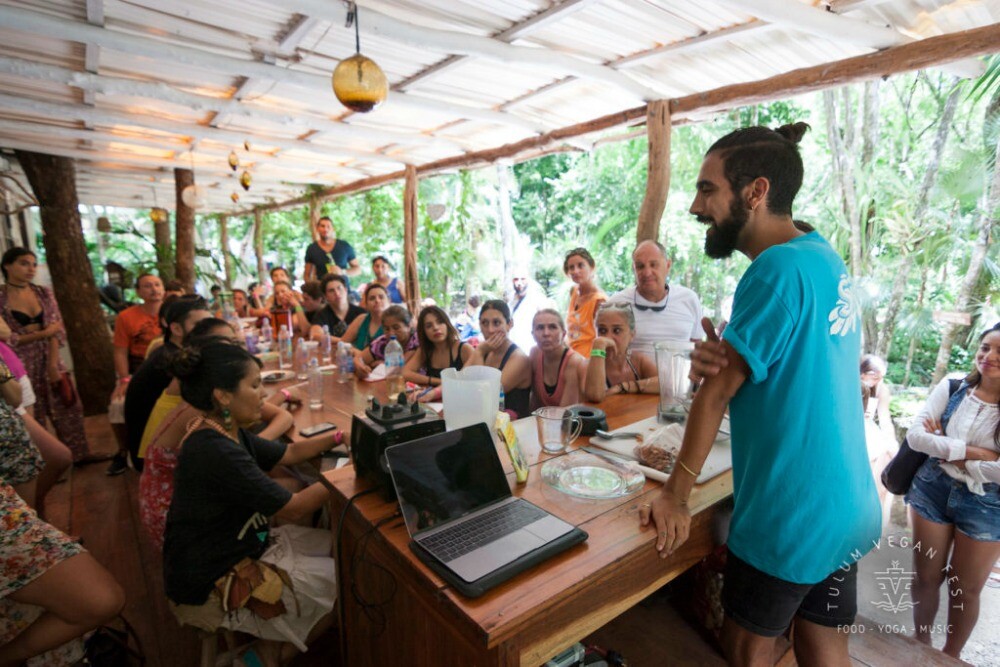 And now for its fourth edition, we’re proud to say that the first day of the festival will be right here at Sandos Caracol Eco Resort. On Friday January 27, we’ll have food stands, eco tours, conferences, a Maya shaman, live music, and more surprises to kick off the Tulum Vegan Fest.

In anticipation of this big Riviera Maya event, we interviewed one of the creators of the Tulum Vegan Fest, Olivia Martinez Jimenez, in order to discover the festival’s roots and learn the benefits of a vegan lifestyle.

Hi Olivia! So tell us, how did you move to Tulum, Riviera Maya?

I came to live in Tulum – I really don’t know why Tulum because before I’d just heard about Cancun and Playa del Carmen. Anyway, I lived 13 years in New York, I’m a yoga instructor, and my first time in the Riviera Maya was when I still lived in New York. I organized a yoga retreat for my students, and when we came to the Maya ruins of Tulum I fell in love… and that’s how it happened, I got here and I said, “Wow! What am I doing in New York?” And afterwards I kept organizing more yoga retreats with my other teachers. I came back to live in Mexico at the end of 2004. I came back to Tulum in 2007, and for the last time in 2013 with a yoga retreat, and that’s when I said, “I want to come live here.” Just like that. Just that simple. I didn’t want to be anywhere else. I had nothing to tie me down.

Why did you choose to be vegan?

I’d been practicing yoga for a long time before becoming vegan. I didn’t eat red meat. And well, I always ate fresh fish, never frozen, so only when I went to the beach. And because of problems with colitis, etc I stopped eating red meat even before starting yoga, and I’ve been doing yoga for 19 years. So when I came to live in Tulum in 2013, I met a chef named Roberto Terrazas and hired him to do the catering for a one-month retreat and to give us some workshops on healthy eating, not necessarily vegan. What he did was pure raw vegan food. Why? I don’t understand, but that’s what he did. And anyway, after that month-long retreat at Holistika Tulum, I never ate meat again. I became vegan. I couldn’t see myself eating any kind of meat. Not white meat, nothing, no animal product. 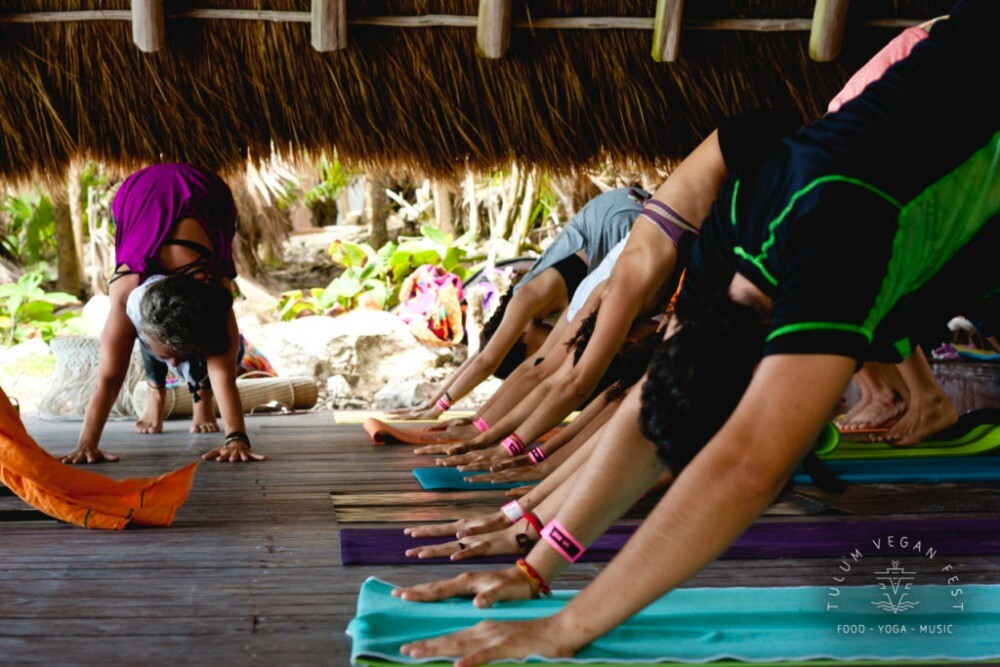 How does being vegan help the environment?

There are so many documentaries with so much information, statistics and complete evidence saying that what most contaminates the planet is the cattle industry… Massive deforestation makes space for the cattle to live. Water, they use so much water. The gases emitted by the cows contaminates with much more carbon monoxide than even an airplane. So – that’s not sustainable. An diet based on animal products is not sustainable. It destroys the planet in every sense of the word, and like I said, there’s evidence and so many documentaries available to people now and we can realize this. We can have the information and not be part of this industry… for example, the last documentary I saw, produced by Leonardo DiCaprio, “Before the Flood”, explains it all perfectly. He carried out an extensive investigation with scientists from all over the world where they prove that global warning is mostly, BY FAR, created by the meat industry, the cattle industry, the dairy industry.

How is being vegan good for your health?

There are so many benefits… I could tell you about cardiovascular diseases, for example. With vegetable-based eating, the risk of excess cholesterol is almost zero because vegetables have no cholesterol. Also hypertension – since they’re not pre-made, you’re not eating fatty meats, they’re not processed, so there’s not as much salt, not as much minerals and potassium. And obesity… you lose a lot of fat because vegetable-based food contains more fiber, which has a filling effect and you don’t eat too much, and it gives you better digestion. Fruits and vegetables are low in calories, etc. Also osteoporosis – the bones benefit the most because animal proteins produce acidity, which results in high bone density loss. So minerals and fruits and vegetables help your bone metabolism.

How did the Tulum Vegan Fest begin and who helped?

Well, the idea for the Tulum Vegan Fest stems from my work with Chef Roberto Terrazas, who you remember was the person who inspired me to turn vegan. The retreat we had at Holistika, we had 10 girls who came from different parts of Mexico and abroad, from Argentina. And for a whole month, I gave yoga classes and I wanted to offer something different, more things, not just yoga, and I was in the process of detoxing my body. I had moved to Tulum and wanted to live a different life, and I wanted to share it. So, after that retreat, I was on Cloud 9 because I thought we had done a great job, but then when the retreat was over, I realized these were people who could pay for a retreat and have access to that information; they had paid over $5,000 dollars for that retreat. So I said, “Well, what good am I really doing?”

And back when I lived in New York and started giving classes, I realized that the perfect formula to have it all is to invest a lot of passion in a project with lots of love, work and honesty, and give it as a service. For me, that was an ideal formula in New York, so I decided to do the same here. I thought about this, and I said, “Well, I don’t have to do a one-month retreat; I should do an event that’s available to everyone, and since I don’t have the money to pay all these guest speakers, what I’m going to do is ask them to come for free, and cover their accommodations, knowing that Holistika would support us completely.” At Holistika, they have two dorms with 12 beds each – 24 beds. I had the chance to invite 24 guest speakers, without spending my own money, and offer them a place to stay. So I thought about this, and the name Tulum Vegan Fest came to mind. I said, “Yes, perfect, Tulum Vegan Fest.” First I went to Tulum’s Director of Tourism Promotion, Mario Cruz Rodriguez. I was walking down the street, and I popped in to City Hall, and I told them I wanted to create a festival, the Tulum Vegan Fest, and they sent me to him; I went, and from the very beginning he supported me. And then I ran to my friend Chef Roberto’s house, and I said, “Rob, help me to make this festival. We’re going to make it, we’re going to do it.” And he said to me, “Yes, let’s do it! Of course, let’s work together,” and a week later he told me, “I have a friend” (because we had no idea where to start) “I have a friend who is going to help us.” And he introduced me to Isro Vergara. We went to visit him at his house and told him about the project; he loved it, and well, the rest is history. Now, Rob is less involved in the festival because with his restaurant he has so much work, but those of us who have been here since the very first Tulum Vegan Fest are Isro Vergara and me. Isro and I are the directors, producers, creators of the Tulum Vegan Fest. And well, we’ve really had support from so many people. Among the most important people, if not THE most important person in the Tulum Vegan Fest, is Marco Antonio Regil (Mexico TV personality). To him, all my thanks. I cannot express in words what Marco Antonio Regil has done for the Tulum Vegan Fest. He has made this project grow in an incredible way. The support he gave us since the first festival, and coming to the second festival, is something incredible. It’s an incredible support. Marco Antonio Regil, let’s say he’s the ambassador of the Tulum Vegan Fest. 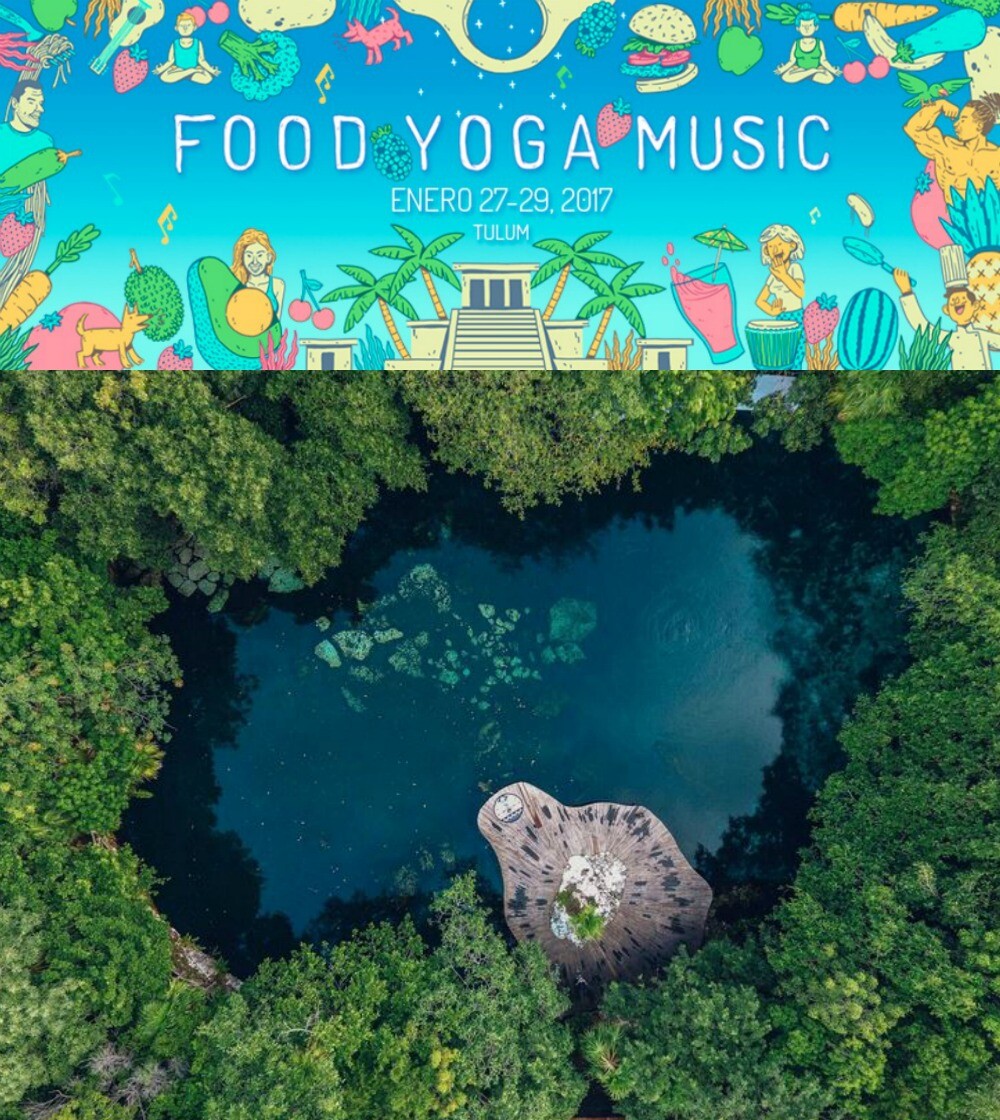 Get Access to the Tulum Vegan Fest at Sandos Caracol Eco Resort!

Attending the Tulum Vegan Fest is easy and affordable. A ticket includes access to all three days of the festival (Friday January 27 at Sandos Caracol, Saturday January 28 at Papaya Playa Project Tulum, and Sunday January 29 at Holistika Tulum), and the ticket only costs $550 pesos (about $25 US dollars). Click here to visit TulumVeganFest.com and buy your ticket online via PayPal.

To see the full itinerary of the first day of the festival at Sandos Caracol Eco Resort, you can find it here (in Spanish only).

And for guests already staying at Sandos Caracol on January 27, you have free access to that day’s events! (But you’ll have to purchase a ticket if you want access to the Saturday and Sunday events in Tulum, and the Guerra de Tacos, or Taco War, with chefs from local restaurants like Charly’s Vegan Tacos, is only available to those who purchased special passes in advance.)

We hope to welcome you on Friday, January 27 to Sandos Caracol for an afternoon of music, food and culture with the Tulum Vegan Fest. See you here!

Deadly Beauty: The 3 Day of the Dead Women